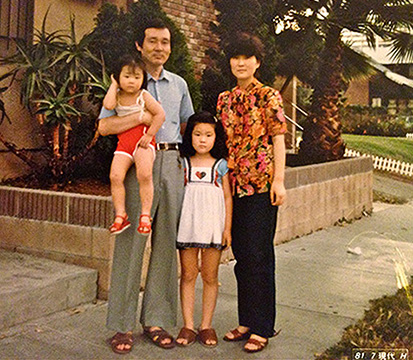 In front of our first apartment in Koreatown. My not-very-pregnant-looking mom is actually very pregnant.

My name is Helen Kim. My family immigrated to the United States in 1981. My dad was 39 and my mom was 32 when they decided to make a new start. I was seven, my sister was two and my brother was seven months from being born. Our very first apartment was on 8th and Ardmore in the Koreatown neighborhood of Los Angeles. My dad went from being a corporate chemical engineer with a company driver to being an office assistant to a chiropractor. My mom was a pharmacist with her own business who suddenly found herself as a stay-at-home housewife, albeit temporarily. She didn’t understand the language or the culture but had to advocate for her children all the same. I don’t know how my parents did it. As for me, every day at school was a bewildering and disconcerting mystery. One time, a boy kissed me on the forehead after school and I, shocked and horrified, rued the day I was forced to come to a country filled with such atrocities.

I eventually got used to life in the States. It helped that there were no more incidents of surprise kiss attacks. We lived in Koreatown for a total of five years before moving to the suburbs but Koreatown continued to be the center of our family life. My parents read the Korean newspaper, listened to Korean radio stations and bargain-shopped at Korean supermarkets. Our family worshipped at a Korean church where my parents found a support system and picked up know-how about raising children in this new land. My siblings and I rubbed shoulders with hundreds of other Koreans each Sunday after having spent the week trying to assimilate with American kids at school. At home, the Kim children were constantly reminded of our Korean heritage and expected to adhere to Korean standards of behavior and propriety. All these things revolved around and were reinforced by Koreatown. 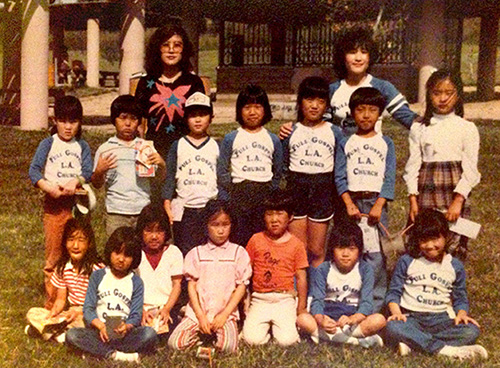 At a church picnic. I’m standing on the far left.

Koreatown is vastly different now than the way it was during my childhood. Today, it’s a hotbed of gentrification and of-the-moment cultural and culinary trends. Back when I was living here, seeing a black or white person in a Korean restaurant was like a Bigfoot sighting. Nowadays, waitresses will serve a piping hot bowl of soon-tofu to a Midwestern transplant of Scandinavian descent without blinking an eye. If you look carefully, though, remnants of the old Koreatown — the foundation of everything we recognize today — still exist.

I don’t know all the ins and outs of Koreatown: I’m not a KTown connoisseur and I’m certainly no historian. However, I do know my personal story. KTown Is My Town is an unofficial, incomplete and unsubstantiated tour filled with personal anecdotes and recollections about family and cultural identity set against the backdrop of Koreatown. It is a documentation-in-progress of my immigrant story but, at its core, KTown Is My Town is about the age-old art of storytelling as a means to keep the past alive and the visceral act of observation that — with all of its inaccuracies and biases — informs one’s sense of reality and connection to folklore. In this way, I invite you to join me and make KTown your town.