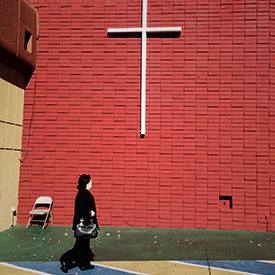 Oriental Mission Church/동양선교교회 (OMC)
Our family has attended this non-denominational Korean American church on the northern end of Koreatown since the late 1980s. My father, James Kim, has been an elder here for over 15 years. He will discuss the church as a critical spiritual, social and cultural center of the Korean diaspora experience. He will also provide information on OMC specifically as well as share his personal story as a first-generation Korean American.

Western Avenue
We will be traveling on foot and via bus on Western Avenue, one the major streets in Koreatown and one of the longest north–south streets in Los Angeles County. 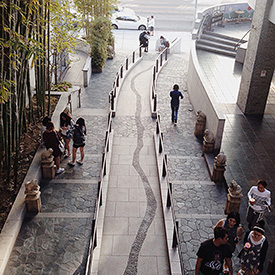 H Mart
No trip to Koreatown is complete without a visit to a Korean supermarket. Though small by comparison to others nearby, there are plenty of interesting fares to peruse and sample.

Wilshire/Western
Two architectural gems stand within steps of one another near this intersection. The Pellissier Building and adjoining Wiltern Theatre, together commonly referred to as the Wiltern Center, represent one of the finest examples of Art Deco architecture in the United States. About a block east is the grand Wilshire Colonnade, a tribute to classic Roman architecture.

Radio Korea
Directly across the street from the Wilshire Colonnade is Wilshire Park Place, home of Radio Korea. Radio Korea (AM 1540) was a communication lifeline for many Korean Americans who were left to fend for themselves during the LA Riots. 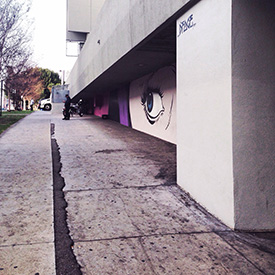 Wilshire Boulevard
We will travel a few blocks east on this major east-west street, where the current Koreatown began. We will pass by the architectural and spiritual landmarks Wilshire Boulevard Temple and St Basil Catholic Church.

The Line Hotel
Our final destination on Wilshire will be the Korean/Korean American-inspired Line Hotel, newly renovated by the Sydell Group (of Palm Springs’s Saguaro) and featuring the Korean American celebrity chef Roy Choi. This boutique hotel is as hipster as hipster gets.

Dan Sung Sa (Ktown Is My Town tour only)
We end the Ktown Is My Town tours here, one of the oldest establishments in Koreatown. Dan Sung Sa is named after the first movie theater in South Korea and is a pojangmacha, usually a small tented restaurant on wheel or a street stall that sells a variety of popular street foods. The streets of Korea are littered with these at nighttime. The booze of choice is soju (distilled rice liquor) or makgeolli (unfiltered rice wine traditionally favored by the working class). You might liken the pojanmacha to the Japanese izakaya or the British pub.