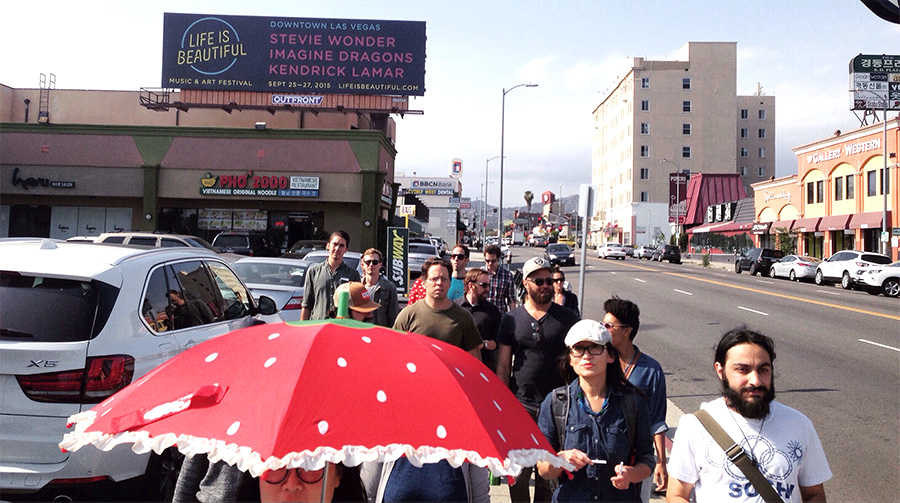 I led this crew down Western Avenue this past Saturday. It was the first tour that I “opened to the public”. I still feel unprepared to do this for realzies but you gotta jump into the deep end of the pool some time. I didn’t do all that much to advertise the tour but I did post about it on Facebook and Instagram. There were 18 adventurous participants, many of them people I’d never met before. All day Saturday, I had the worst case of butterflies-in-the-stomach since my sixth grade talent show audition when I sang “This Land Is Your Land”. It was a great group of people, though, and the tour ended up being a thoroughly rewarding experience.

The group discussing their Active Observation, er, observations at Madang Mall on Western and 6th

I still have room for improvement — juggling logistics, maintaining focus, sharing more anecdotes — but these are part of continued on-the-job training, I think.

My favorite part of the tour is the coming together of people. At the start of the walk, the group was relatively quiet, other than me shouting information or people chatting with whomever they came with. By the end of the walk, though, there was a pleasant cloud of hubbub behind me, an indication of the camaraderie that had formed from walking around for two-and-a-half hours together. Though not everyone from the tour participated, the dinner afterwards cinched the deal. This is the magical power of booze and carb-y comfort food. Yay for makgeolli and dukbokki. Yay for adventurous people.

You can view a few of the #ktownismytown photos taken by participants here.